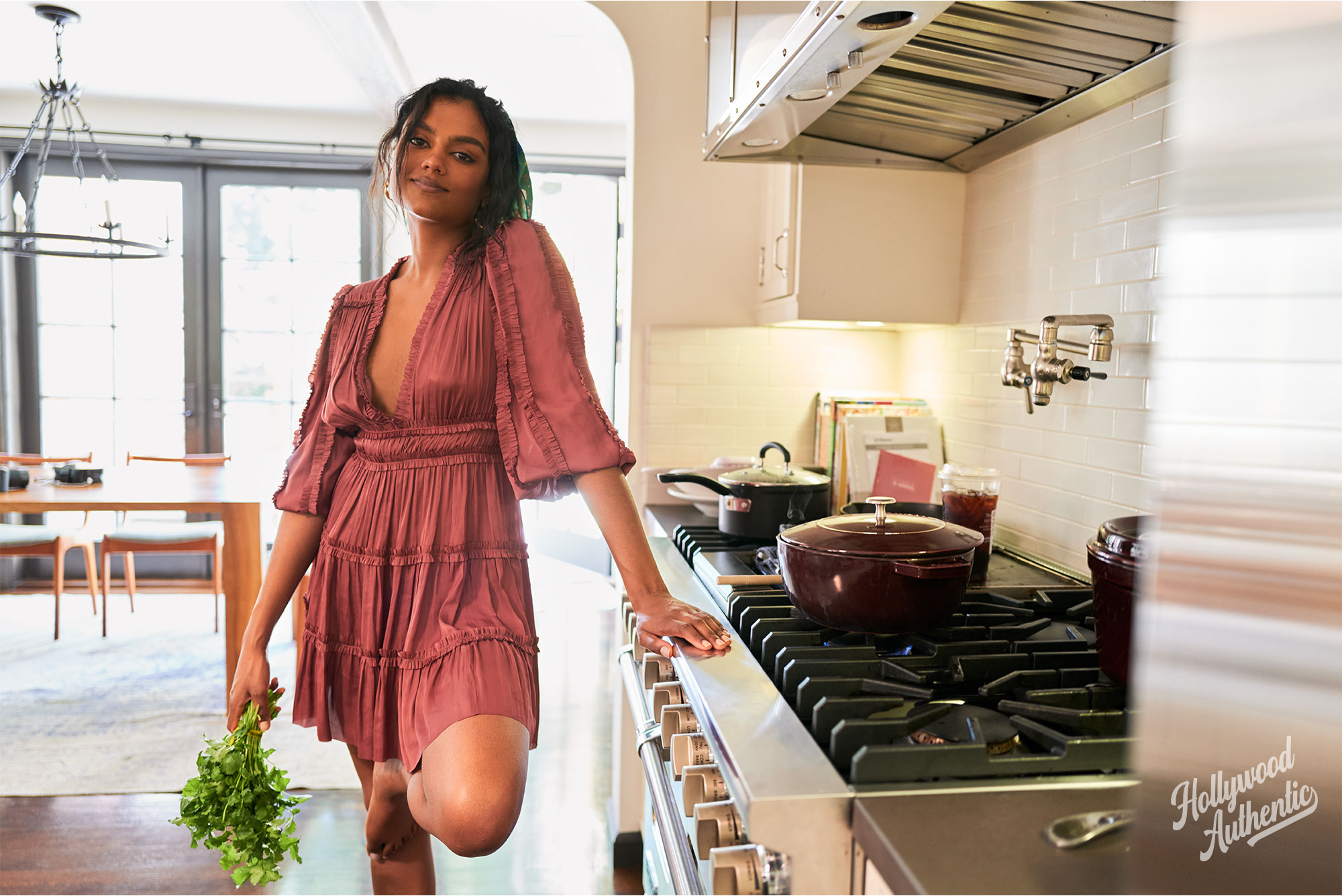 ‘I like making breakfast; whether it’s a smoothie or just scrambled eggs, it’s the first thing I think about, to be honest, in the morning,’ announces Simone Ashley. But her signature dish is curry. ‘I’m South Indian, so I’m Tamil, and the food… I mean my mum, she cooks the most amazing food.’ Today, in honour of Mum, Simone is making us a vegan curry. It’s vegan ‘because it’s just easier to do’, though she was vegan for a while, but started to eat meat again on the set of Sex Education, the Netflix series that turbo-charged her career.

Today’s recipe is, says Ashley, nothing special, just a go-to from a book. First up is the rice: ‘The trick is getting your ratios right. Ratio of rice to water and just low heat. You don’t want it to burn at the bottom, you don’t want it to overcook. Just take your time with it.’

Then she takes command of the kitchen, asking for a vegetable peeler – ‘This is a weak peeler!’ – and adds coconut oil, garam masala and black mustard seeds to butternut squash, not to mention the ready-peeled garlic she’s brought with her, as if she always travels with ingredients to hand. ‘I love cooking,’ she says. ‘I don’t really get to do it much with traveling around all the time and being on set, so it’s nice and a bit therapeutic to use my brain in a different way.’

Simone Ashley, now 27, says she grew up on Disney classics. ‘We always had The Jungle Book playing or Snow White… We went to Disneyland all the time.’ She knew the words to the whole of the remake of The Parent Trap – ‘Me and my brother used to recite that film in the car whenever we had long journeys’ – but admits that she thought the Lindsay Lohan character was played by real twins.

Then in adolescence it’s fair to say she developed very non-Disney tastes: one favourite film was Boogie Nights, and another, Kill Bill. ‘I loved Uma Thurman in Kill Bill… Everything about that film, the colours, the cinematography, the music, everything, and just how driven this character was.’ Tarantino’s world was, however, a far cry from her own, growing up in Surrey with her parents, both academics, who were first-generation immigrants from India. She did the normal teenage things like waitressing and getting fired from a hairdressers – ‘I messed someone’s highlights up and I washed them off in the wrong way’ – and claims that unlike her Sex Education character, she was not ever part of the cool gang at school.

‘I failed at everything in school. It was just my attention that was bad,’ she says. And she also failed to learn Tamil or Hindi, which her mother encouraged her to do. In the end, Mum got her playing French video games to try and get her to pick up the language, reasoning that as she’d been named Simone, French might be the answer. It wasn’t. ‘I was awful – at maths, all of that stuff. Just had no interest. And my brother would force me and sit me down, bless him, and get me to revise, get me to study. He tried so hard and I just had zero interest in it. I was very stubborn in that sense. If I didn’t like it, then I just wouldn’t do it.’

That stubborn streak paid off, though, when she found acting. She says now that she was just determined to make it work. Shortly after her first job as ‘a background artist’ in Straight Outta Compton, she did more TV work in the UK and then landed the role of the bubble-gum-bubble-blowing Olivia in Sex Education.

During lockdown she moved to LA to try and jump-start things stateside. ‘I do love LA,’ she says. ‘I have more fun here, when I’m out here, and I eat better; I think it’s the sun. It just makes me feel a bit more energised and proactive.’ She spent her days walking a secret hiking trail through Griffith Park to admire the view of Los Angeles spread out below while eating sandwiches. And then occasionally she’d hit the road. ‘I used to drive a little Mustang when I was living out here, and I loved it. I’d always have Fleetwood Mac blasting and I’d just take off.’ The music was inherited from her dad, she says: ‘I grew up listening to that kind of music. The Doors, Rolling Stones, Fleetwood.’

Ironically, the next job required Ashley  to relocate back to the UK for Bridgerton, the hit period drama, famous for being colour-consciously cast. Ashley is front and centre of Season 2, so front and centre that when she looks out of her hotel window on Sunset today, what stares back at her is an enormous billboard: ‘When I wake up and I’m getting hair and makeup done or I’m having breakfast or a coffee, I’m literally looking outside at mine and Johnny [Bailey]’s and Charithra [Chandran]’s faces!’

She’s been overwhelmed by the response to the series: ‘We’ve seen such really positive feedback from people seeing people that look like me and Charithra on this show,’ she says. And she admits that the role has changed her. ‘I used to think, “Oh, I want to just be seen as an actress”, but I now realise that in this line of work you are representing and you do have a voice. I think a part of me was quite scared of owning the fact that, yeah, I am representing a minority. And I think it would be quite naive of me to think I’m just an actress, because, to think that is to think that the problem’s been solved and that we are in an industry and in a world where it’s completely normalised, and we’re far from it. Hopefully, in 20 years’ time it won’t be an issue, but we’re not there yet.’

She confesses she hasn’t talked about this before because ‘there is something quite scary about owning that position’. But then she smiles. ‘But I can have so much fun with this and I don’t need to be afraid. And it’s not about just me. It’s about sharing space with so many other amazing South Indian, South Asian actors.’

It sounds like she’s had a revelation. ‘Whatever industry you’re in, whatever you do, we all have a voice, we all have the power to speak,’ she says. ‘And I think that’s something I’ve never addressed in my life until now, when I’m dipping my toes a bit further in, I guess. Yeah it’s a bit scary, but it feels limitless when it’s positive, like you can just keep going downhill, like on a bike, speeding forward. It’s like when you’re on a swing, that stomach feeling. There’s nothing to stop you.’ And we’ll eat to that.

Peter Howarth is the former editor-in-chief of Arena, British Esquire and Man About Town