Where I’m Coming From 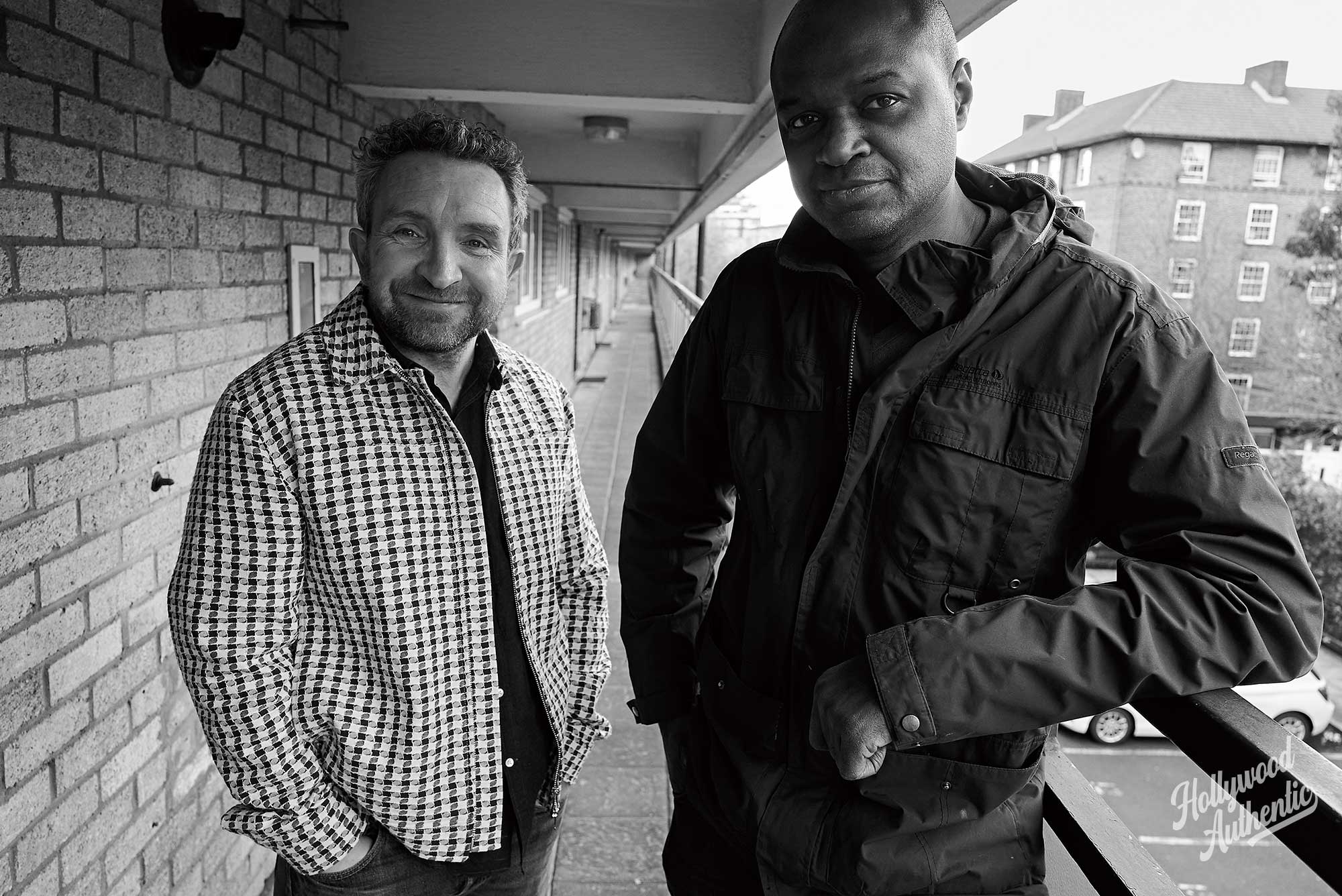 People don’t really appreciate what a crazy life it is being an actor. If I was a big film star, well, they do maybe two films a year. But I have to do six or more. Because I am always the slightly out-of-focus best friend, never the lead. So I’ve done something like 120 films. When I was doing [US TV series and movie] Ray Donovan, my life was one third in America doing that, one third on another film set somewhere and one third back in the UK. And when I am here, I always try to get back to Hackney.

I was brought up on the Hackney Road. Not the gentrified bit – Shoreditch or Hoxton. A lot of the people I grew up with are still there, still living on the same estate. And I pine for those guys, I really miss them, especially Emanuel Mitchell. He is St Lucian and, basically, he taught me to dance. He was a bit older than me, three or four years. So I was, like, 13 or 14 and he was 17. And my mum used to say to him: ‘Make sure you get Eddie home by 10pm.’ And he always did. Even if he was busy pulling a bird, he’d break off to make sure I got back home. When we went for a night out, we always used to go out dancing.

My kids are teenagers now and the oldest ones go clubbing. I tell them that we used to drink a tin of Tennent’s Super to get a buzz on and that was it. We couldn’t afford drinks at the club. And we never got stoned, never got out of control, because some of the places we went to were really dangerous if you didn’t keep your wits about you. One of the ways to stay out of trouble was just to keep dancing. And so, we danced. I never used to pull. Emanuel did – I couldn’t pull a toilet chain.

We also danced at home. We would take all the furniture out of one house and move it into the other – Emanuel’s into mine or vice versa. And we’d bring in this big sound system. We had Paul Campbell on the door. “Meatballs” we called him [after Campbell’s Meatballs], a very handsome guy. He made sure only the right people came in. Mind you, I reckon if you bunged him a jacks [£5] you’d get through the door. And we played music and danced till five in the morning. Mostly James Brown and a lot of Northern soul and rare groove. We used to do the drops and everything. There was one we used to do and someone said to me, that’s called the Wigan Roll and I never knew that. We just did it.

When was the last time I had a good dance? Not that long ago, at my wife’s 50th. She said, you know, Eddie, it’s not going to be all about the dancing. But it was. And I think I got half cut and one of my kids went up to Emanuel – they love him, too – and said, look after Dad, will you? Which is funny because he’s been looking after me most of my life.

Emanuel had two brothers and two sisters, and when I was young, I spent probably more time in their house than in my own, because my mum and dad had a difficult marriage. Everyone used to come to the Mitchells’ place. All nationalities, all welcome. And if you walked into the kitchen, you’d have to put some water on the rice to make sure it didn’t burn. Because there was always rice and peas on the go – Joyce, his mum, would feed the neighbourhood and she was a single mother, a cleaner, bringing up five kids in a council flat. If it wasn’t for his family taking me in, I think I would have been all over the place. I owe him. I lived on that estate from the age of four and left when I was 28. So, we were friends for a long time. Still are. And he’s still a fantastic dancer and a fabulous artist.

His dad wasn’t around. Not many dads were. Every dad had a court order against them. The rule was, if you saw your dad, you had to tell your mum, who’d call the police!

My mother got me this T-shirt once and it said: One Race, The Human Race. I used to wear it when we’d go and stand on the corner because the NF [the National Front, a UK far-right political party] were walking past and we’d swear as they came by. Because we’d face them down. I was talking about this with someone the other day, the rise of populism and racism that we are seeing around the world. We were dealing with that back then. When you hear politicians trying to bend to these people or yield to them, you can’t do that with racists. You can’t bend to them. You’ve just got to call them out. We’ve been calling them out all our lives.

In retrospect, I think there were certain signs that suggested I might be an actor even when I was a boy. WhenI was a kid, I used to sit on my dad’s knee and watch movies. His favourite actors were Robert Duvall and Gene Hackman. And I remember watching The Godfather, which is actually my favourite film, and I was always drawn to Duvall, because he was so silent and so minimalist in what he did. He expressed so much by doing so little. My old man, he always used to point at him and say – he plays a good part. I always wondered: what does that mean? He plays a good part. And so, I would look closely at what he was doing or not doing and so probably had an appreciation of good acting even then.

Later on, Bob Hoskins was a massive influence on me. To watch films like The Long Good Friday and to hear someone like Bob speak, with that accent, and for that character to be the protagonist of the story, was a real eye opener. I remember, he swore on screen and it was authentic. Usually, you’d hear someone swear and it never sounded right. And Bob swore and I thought, that sounds just like my dad.

I also remember being mesmerised by this cover photo on The Face magazine. It was the new generation of young British actors. Tim Roth, Gary Oldman and so on. It was Gary who really stood out. He’s just phenomenal, as an actor and a director. Some time later, I was telling Jack English, who was the unit photographer on a movie I was doing, that I was a big fan of Gary’s work. A few days later Jack said, I’ve got a message for you from Gary, an email. Not a long one. It said: ‘Eddie, be an international actor’. What he meant was, don’t only be a London actor. Try and work with people from different countries, cultures and backgrounds. It was wonderful. I’ve never spoken to him since, I don’t know him in person. But it was quite a profound thing to say, really.

Something else I had to learn was not to be afraid of long-form television. I was always scared of doing episodic-style dramas, and I didn’t know how you could,as an actor, tell the arc of the story and balance it out over such a long time span. I turned down a role on Boardwalk Empire because I wasn’t sure how to do it. But when I did Ray Donovan, the guy who became the show runner, David Hollander, he was a great help in guiding me through it. He taught me how you would set some things up in one episode and pay it off three or four episodes down the line or even a season later.

There was never an “Eddie Marsan” type, I was never really put forward for one kind of role. It was always a different sort of character. Nobody has ever asked me to play myself. They do with some actors, the ones with charisma who cost 20 million dollars. I was always hired to play someone else, not me. It was a struggle to begin with, but as I have got older it is to my advantage because nobody has a fixed idea about me. Some will know me from Ray Donovan, others from something like Happy-Go-Lucky or Ridley Road. So, I’m offered a very broad variety of parts. I have just worked with Guy Ritchie on a couple of projects, including Operation Fortune, a spy spoof with Jason Statham and Hugh Grant. I’ve also played John Adams, the American president, in a miniseries called Franklin, which has Michael Douglas as Benjamin Franklin, which we shot in Paris. It is about him going to France to raise funds for the American War of Independence. I did some work on a film called Midas Man, where I play Brian Epstein’s dad. It’s a very good script, although it is on hold right now. You might have thought there wasn’t much left to say about The Beatles, but it’s a great story. And then there’s Firebrand, about Henry VIII’s last wife, in which
I play Edward Seymour, brother of Jane Seymour. Then there is The Power, which is based on a novel – it has a brilliant premise, in that women gain the power to electrocute men. Which gives them control over them. So, yes, there’s lots of very varied work, which I am grateful for.

One of the reasons I like going back to my old neighbourhood is those people knew me and loved me before I was any kind of famous. They loved me when there was nothing in it for them. Now, I have a lot of people who want to talk to me because I have a level of fame. Being well-known from film or TV is a weird business. It can be very lonely, because you meet people and they don’t react as they would to anyone else. When I go back to Emanuel and his family I can relax. We don’t talk about my work, we talk about the kids or what’s happened to the local area or about our dancing days.

In a way, it was the dancing that really got me into acting. I was dancing in a club in Hackney and some guy came over and asked if we wanted to be extras in a movie. So, we said yes, and I ended up watching Jamie Foreman do a scene. And he was great. I loved it. I was a printer at the time and I just thought: that’s what I want to do. So that’s it. I became an actor.

Eddie Marsan stars in the TV miniseries The Thief, His Wife and the Canoe, and appears in the film Vesper, released on 21 October 2022